I find myself at a crossroad. As I mentioned in my previous post reflecting on my latest break up, I’m realizing that I am facing a particular decision at this time in my life. I have a choice to make and it’s probably the most profound choice of my life… 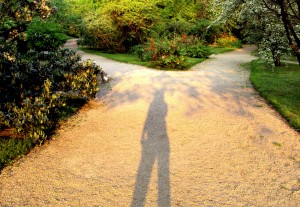 I never saw myself with a family of my own. As much as I love kids and have answered a call to ministry that largely focuses on young people, I never thought that I would be the one to birth children. I’ve written about this before, but recently something has become very clear. I am standing at a crossroad and my recent relationship helped me to define this reality. On the one hand, there is a life that I could lead that includes a husband and a child (possibly) and a life focused on my family, where my family is the central focus. On the other hand, there is a life I could lead that is focused on the work that I am called to and a freedom that can only come when one is unencumbered by the responsibility to care for another. There. I said it.

I recently was having a conversation with a woman who is a mother of two and married. She asked what it was I did and I told her, sharing that one day I might want to live and work abroad. She commented that she too had this dream until she became a wife and a mother. And it hit me like it’s never hit me before. I can’t do both. Not only can I not do both, I don’t think I want to even try.

I used to talk about the fear that I had when I thought about being a mother. After all, I am aware of my depression and anxiety and the various risk factors that would become prominent if I became pregnant. I’m beginning to realize that it’s not just about fear of childbearing, it’s a fear of choosing a path that may not be accepted and ultimately doing that which is inauthentic to the person that God has created me to be.

I think about my friends and family who had children when they were younger, like in their late teens or early twenties. Many of them made choices that meant they were going to be finished rearing children (barring the birth of more children as they aged) by their mid-30’s or early 40’s. They have the whole second half of their lives to choose what’s next. I’m realizing that by waiting to have children, that choice is no longer one that I can make. If I start tomorrow, I will be raising a child into my mid 50’s. And I can’t imagine doing that when there are so many things that I want more than I want children.

My love of my work, my vocation, my God-given call is leading me down a road that is scary. It is a road that is filled with opportunity and travel and freedom to do what I want when I want to do it. It is a road less traveled, with bumps and moments of loneliness and sacrifice. It is a road that my parents probably don’t want for me. It is a road that includes love and partnership but these realities are defined differently. It’s not about having a mate but it is about creating a life that has a web of connections that go far beyond what one person might be able to offer me or what I’m willing to give one person.

As a woman, I feel like we are pressured to give of ourselves in ways that can only be described as super human. The fight for equality has made it such that women can ultimately choose for themselves what type of life they want to lead. But it seems like there is still judgement when women choose self over others. And that’s what I’m ultimately choosing – my self.

But here’s the thing about choices – they change as we grow and experience more. The choice that I make today may not be the choice that I make tomorrow but I do believe that it’s a choice that will carry me through the next chapter in my life. Maybe I’ll choose something different in the future. Maybe I won’t. But either way, the choice is mine and that’s the loveliest thing about all of this. And I’m not being naive. I’m aware of the fact that any choice I make has its pros and cons. There is a cost for everything and the question becomes what am I willing to let go of as I seek to follow the path that I chose? I have the freedom to ultimately choose what’s best for me, just as you have the freedom to choose what’s best for you. But I’ve learned something – I can only choose what’s best for me if I know me…

I believe that we can become victims of our situation and this is disempowering. If my life has taught me one thing to this point, it’s that we always have a choice. The choices may not be easy or even desirable, but by nature of being created by the Divine, we have been endowed with free will and the ability to exercise it. My prayer for all of us is that we reclaim our power, speak truth to the deepest desires of our hearts, live authentically and love ourselves in whatever way we choose to do so. You have the freedom to choose the life you want. Don’t forget this.

One thought on “A Word on Choices”

This site uses Akismet to reduce spam. Learn how your comment data is processed.

A Word about My Blog Title

“Embracing our shadow is the ultimate act of self-love. There is no greater love than the one that allows us to shine a light on the aspects of ourselves that we have judged and made wrong. Embracing our dark side gives us a new found freedom to be with the darkness in others. For when I can love all of me, I will love all of you...” ~Debbie Ford via Soulful Living

A Word about Intent

The thoughts and views expressed on this blog represent me and me alone. They do not represent the views of any church, organization, institution or ministry that I may be associated with. This is an independent endeavor. Please remember that I am not a therapist. If you or someone you know are contemplating hurting yourself, please call the National Suicide Prevention Hotline at 1-800-273-8255. If you or someone you know is contemplating hurting someone else, call 911. I am not an expert by any means. I am someone who utilizes medication, therapy, spiritual direction and other forms of renewal to cope with my reality. I recommend professional therapists and doctors to manage your mental health.

A Word about my Words

A Word about Sharing